Another not previously circulated photo. 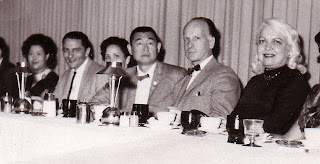 A friend of mine, named Hanshi Patrick McCarthy "you may have heard of him..." gave me this photograph last night. From left to right Mrs. Meiko Urban, Grand Master Peter Urban, Mrs. Kim, Grand Master Richard Kim, Sensei Duke Moore. 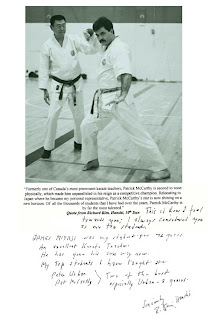 Here's what Richard Kim had to say about both Maestro Urban and Hanshi McCarthy. Click on pic to enlarge and read.
Posted by S. Malanoski at 7:25 PM

What is the difference between a Toy, a Tool, and a WEAPON?

What I intend to do, is to stop playing, and to bring That's My Satori and I'm Stickin To It! to the next level, by having established an interactive satellite on Facebook. It is called The Satori Study Group. The group is private, and to interact, one must join. If the applicant is not known to the group, it is necessary to email an introduction, including name, martial arts curriculum vitae, in order to be considered for acceptance.

The purpose of the Satori Martial Arts Study Group, is for readers of this blog to be able to ask questions and make commentary on and or about the subject matter covered here on this site. I encourage the reader to look back into the older posts throughout the years in our archives, and to feel more than free, but obligated to bring up any of the oldies that spark your interest.

The Satori Martial Arts Study Group can be found at: http://www.facebook.com/groups/satorimartialartsstudygroup/ 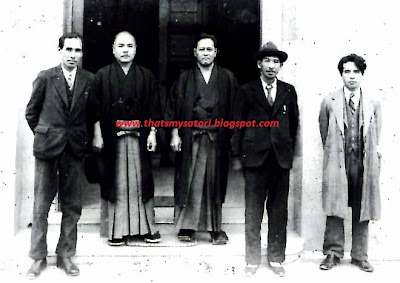 When I first came up with this one, Sensei Elias Bonaros asked me, "How did you find a new Miyagi picture?" My answer? The same way I obtain a lot of my obscure knowledge, and the reason that I don't look my age. I have a time machine...
Posted by S. Malanoski at 10:32 PM 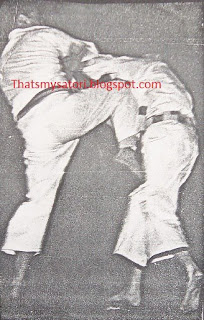 Little snipits of the historic Urban Nagle fight have been circulating for years, however, my friend Sensei, Roy Kaman recently alerted me to the location / existence, of this much more inclusive footage. The still is courtesy of Sensei, Steve Trost.

The rest speaks for itself...

Okinawa GoJu Kai presentation for the Emperor of Japan.

The following presentation, was done by the various Ryu Ha of the Okinawa GoJu Kai, for Japan's Emperor.

In the beginning, center on the SanChin line, and later at the end of the video, is my old friend and MeiBuKan instructor, Masaaki Ikemiyagi. The viewer shoukd note the explosiveness of his movements.

I remember once back in 1981 at Naha University, where he was at one time, Captain of the KaraTE team, and later Coach, he was dissatisfied with a students SeiSan, during a college demonstration that we were watching. He told the student to get dressed and bring him his "the student's" gi. Ikemiyagi Sensei put on the gi, and after the next part of the demo was finished, went out onto the floor and performed SeiSan. I swear, when he landed his heel on the floor after the front kick at the end of SeiSan, with a loud CRACK, he actually damaged the floor. No lie! He walked funny for about a week afterward also... But man! 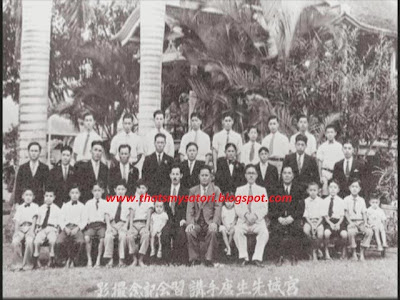 Here is the mention of Miyagi Sensei's visit, in Hawaii Hochi, a Hawaiian Japanese language newspaper. Notice that the kanji for KaraTe in the upper right corner, says China Hand. This predates the wide spread use of the newer Empty Hand kanji. It says, KaraTe expert to give exhibition tomorrow night. Chojun Miyaki, "they wrote his name wrong," one of Japan's greatest experts, will give an exhibition tomorrow night at 7:30 at the WMB Hall on upper forth street. He will spend about three months in the territory, showing in exhibitions and giving lectures. Miyaki is chief instructor for the police dept in naba (Southern Japan) and for the karate dept. of the Japanese athletic association. He leaves for Kaui next monday, for a four week tour.
Posted by S. Malanoski at 5:09 PM 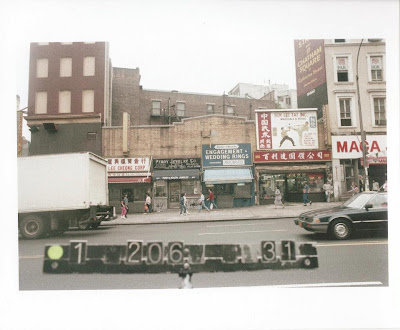 If this place is not familiar with you, then you are either new, or have never been on the NYC Chinatown martial arts scene. The building with the big sign featuring Bruce Lee and Chuck Norris, is the old martial arts store, which was called Bal Lei Tat. This place was huge, and carried all kinds of martial arts goodies, and specialized in Kung Fu supplies. This was a great place to run into others of like interest, compatriots and enemies. Down stairs was the book department that was a variable who's who and what's what, as to the status quo of martial arts related media. Back in the day, media was not so advanced as now. You couldn't read about it on the internet like you are doing.

Many, many years ago, while in the process of building a Mook Yan Jong "wooden man dummy," I stopped in at Bak Lei Tat, knowing that they carried the book, 108 Mok Yan Jong, which besides being a fully illustrated guide book, had a schematic of the dummy = the instructions. 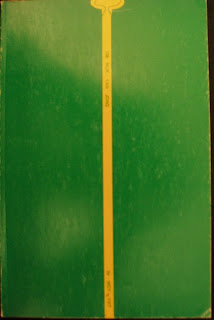 As I was purchasing the book, and shooting the breeze with the book guy, as I had done on a regular for years, he asked if I wanted to meet the author. It just so happened that for some reason, the author, GMstr. Moy Yat, direct student of Yip Man, was upstairs. Like I said, this was a good place to run into people of like interests. Anyway, long story shorter, I got to be introduced to Moy Yat, who, seeing my serious interest in the subject of the jong, suggests that I come and see what the moves in the book really look like. Yes folks, this place was full of surprises.

The building next door has a history that legends are made from. It was owned by Mr. Tam, a prominent figure in the Chinese community, an accomplished Chinese Opera singer, and a personal student of the world renown Tai Chi Chuan Master, Cheng Man Ching. Tam brought Cheng Man Ching in as the teacher at the Tai Chi school on the first floor. The second floor is the Bak Hok Pai, White Crane Kung Fu school of Chin Hak Fu. The third floor is the Chinese FreeMason Athletic Club. Gok Sai Jook Lum Tong Long Pai, International Bamboo Curtain Southern Praying Mantis.

In closing, I simply could not end this glance at the past, without the mention, albeit edited, of the fact that Master Tam, the building's owner, was challenged by a strapping young Hong Kong Chop Socky movie star, and surprised the chi out of him. The name has been omitted, because I was not present, and I trust the word of the elder who told me.
Posted by S. Malanoski at 4:44 PM

Every picture tells a story. 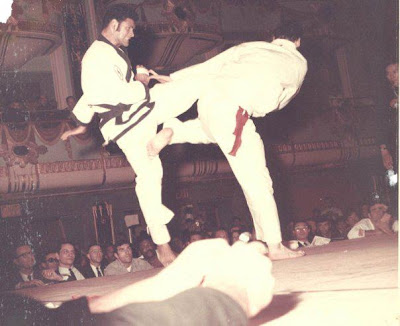 Classic picture  of Sensei, Bob Tiani fighting World Champion Mike Stone, at an event which was run by Aaron Banks, at the Waldorf Astoria in NYC. Please notice Maestro Peter Urban, GMstr. Fred Hamilton, and GMstr. S. Henry Cho, in audience at ring side. An interesting story goes with this photo. Those who have been around a long time, will notice that Stone is wearing a Korean style gi top. During a previous match, when Stones gi top was ripped, Louis Delgado took off his go top, and offered it to Stone. Stone faced Chuck Norris, who was also offering his own gi top, and as he accepted Norris' offer, Stone told Delgado, "No thanks, I stick with the winners." Cold......
Posted by S. Malanoski at 2:38 PM

Madison Square Garden. New York City, circa 1962. The Mas Oyama Tournament. Many of the photos in Maestro Urban's book, The KaraTe DoJo, were taken at this event. Double click on video to see full screen.