There is hope for KaraTe.

Just look at this presentation of Anan / Han Bunkai.

How many times have you heard people speak ill of others just to take the spot light off of their own bad performance?

How many times have you been guilty of doing this your self?

In the martial arts, there are so many people who revel in gossip rather than self perfection.

Yes, everybody loves a bad guy. So they can say "Look, there's the bad guy"

The problem is that it is most often the person who has the most to hide, or be ashamed of, that points the finger of judgment.

It's so much more gratifying to complement or stick up for, someone than it is to speak ill of them.

I remember back in 1980 when I first arrived in Okinawa Japan. I had visited a couple of dojo, and was pretty disappointed in one particularly. Later, while visiting Grand Master Eizo Shimabukuro, I commented about the dojo of disappointment, and asked what he thought. He said "KaraTe teacher no talk bad about anyone." I bowed and said Hai Sensei, as he had just taught me a very important lesson.

Something that I learned from my older brother Dai Sensei Kow Loon Ong, is that it is far more important to clean ones own house, than it is to worry about how dirty someone else's floor is.

I myself have been guilty of perpetuating historic bad mouthing on the subject of Bad BuDo and Pseudo Sensei ism.

That is a short coming on my part.

The thing that really urks me though, is when it is a supposed friend that bad mouths you.

Especially a supposed friend that has so many skeletons in his or her closet that they could easily start a Halloween shop.........

The interesting thing about this, is how folks that participate in this type of interaction generally can't keep their mouths shut. They pass the poison on, gladly sharing where it originated from.

So, my dear reader, what is the moral of this story?

Keep your friends close by.
Keep your enemies right next to you.

And as the Bible says: Don't be so quick to point out the cinder in another's eye, until you have removed the log from your own.

Last night, via suggestion of my friend Greg, I watched a movie that I had never seen before.

It was not a Chop Socky flick.

It was not a Blacksploitation flick.

What it was, was a very well put together story about a gangster from the ghetto, who serves as a retainer to a Mafioso who once saved his life.

Based on the Samurai ideal, replete with readings from the book Hagakure throughout the movie, this is a flick worth watching. 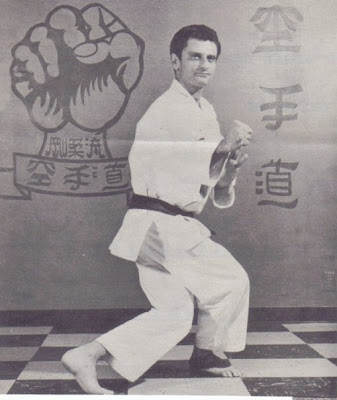 Recently Hanshi Lou Angel, Founder of Tenshi GoJu, and the National College Of Martial Arts, sent me some great pics of historic note.

Hanshi Angel was one of Grand Master Urban’s first students.

Beginning his martial arts training in 1954 at the JuJitsu school of India at 48th and Broadway in NYC, he later took up JuDo under Sensei Nick Yang at The Academy Of Music in Brooklyn.

While in the United States Marine Corps, he trained in IsShin Ryu KaraTe, with GMstr. Don Nagel in Jacksonville North Carolina.

He started training with GMstr. Urban when he returned to NY. He trained with Urban twice a week at The Academy Of Music, and also twice a week at the famous JuDo Twins DoJo.

Hanshi Angel opened a dojo in Brooklyn under GMstr. Urban in 1960, and in 1961 left to open a dojo in Tulsa Oklahoma. This was while GMstr. Urban was still teaching at the 17Th Street DoJo in NYC, prior to the opening of the Chinatown DoJo.

In 1963 Hanshi Angel left Oklahoma as a nidan (2nd degree black belt), and with a letter of introduction from GMstr. Urban, traveled to Japan to train with his teacher’s teacher, GMstr. Gogen Yamaguchi, at the Ueno DoJo in Tokyo. 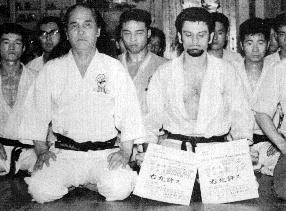 After extensive training with GMstr. Yamaguchi, Hanshi Angel tested for and was promoted to the rank of SanDan (3rd degree black belt.)

The Tenshi GoJu system contains the kata that Hanshi Angel learned from GMstr. Urban and GMstr. Yamaguchi, with the only difference being in the Bunkai that he developed.

(Author's note: During a conversation with Hanshi Angel, he told me that he will always consider GMstr. Urban his Sensei.)

His style and organization became very large and successful throughout the Mid West.

He later founded the National College Of Martial arts, which is open to practitioners of all styles.

One of his more well known students is Jeff Speakman, star of the popular movie The Perfect Weapon, who attained nidan under Hanshi Angel, before moving to California to pursue his acting career. It was Hanshi Angel who suggested that Speakman hook up with Ed Parker while in California. The rest is history…….

As many may know, in March of 1960, Grand Master Urban and some of his students including Hanshi Angel, appeared on the Long John Nebel Show on WOR TV Channel 9. . This was a late night variety show, which was known to feature not so every day things, from VooDoo to UFO’s and conspiracy theories. Interesting late night entertainment for those who found interest in the unusual. 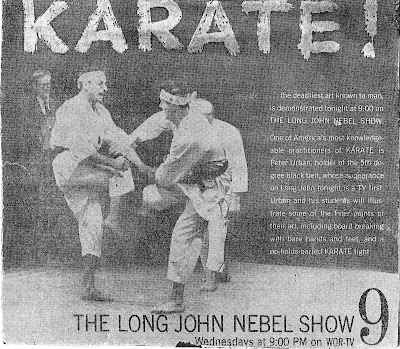 Here is a pic from the advertisement for the show. On left in Iron Wall position, is Hanshi Angel.
Click on picture to enlarge. 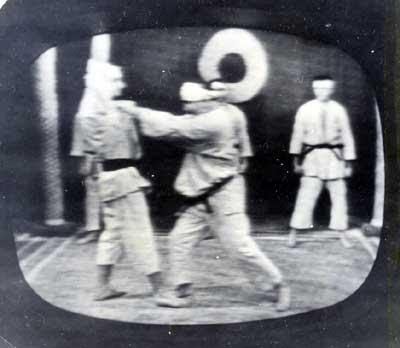 In this picture Grand Master Urban demonstrates a nukite on Lou Angel during the Long John Nebel show. 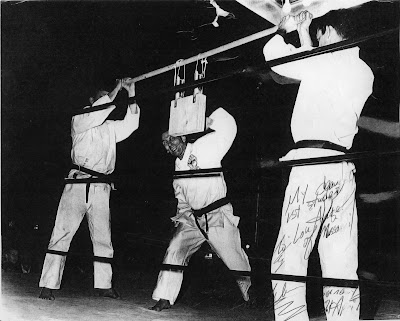 Lastly, here is a classic pic that Hanshi Angel sent to me, of Grand Master Urban doing one of the things that he did best. This pic was taken at Hanshi Angel's Tulsa Oklahoma tournament in September of 1967. GMstr. Urban is breaking 3 suspended boards with his left hand. He had injured his right hand before coming to Tulsa.

Special thanks to Hanshi Lou Angel for his time, photos, and friendship.
Posted by S. Malanoski at 5:51 PM

Shek Kin, who played Mr. Han in Enter The Dragon, has passed away.

He was quite the master in real life. He also starred in many Chinese films that most westerners don't know about.

Here he is, doing a demonstration of his kung fu skills.

Just got the word that Kung Fu TV legend and Hollywood actor David Carradine was found in his hotel room in Thailand supposedly hung by accident.

His body was found in the closet by a hotel maid, with a rope around his neck and parts of his body.

No doubt CSI Thailand is going to get in on this one.

I remember meeting David Carradine when I was a young teenager, at Madison Square Garden during one of Aaron Bank's Oriental World Of Self Defense shows. He seemed like a nice guy.

Here is an old clip of the Carradine that most of us will always remember, replete with the burning urn scene that was taken from Maestro Urban's story about Shaolin in his book The KaraTE DoJo. 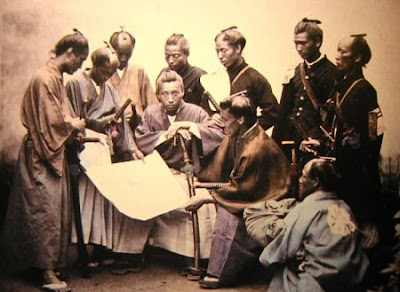 The message given can apply to life in so many ways.

In IaiJutsu, a confrontation ends in the blink of an eye and one of the combatants lies dead on the ground. The samurai could not afford to make a mistake. Mistakes, very simply, meant death.

On the other hand, the only way to learn an art as difficult and complex as IaiJutsu is to make mistakes. So in one respect, you must train with an intensity of kihaku as if there were no room for mistakes - as if they would be fatal - while in another respect, you must accept the fact that mistakes are a normal part of the learning process.

It is important, therefore, not to dwell on your mistakes, wether they are simply training errors in the dojo, or mistakes that have a serious impact in your life. If you allow errors in your past to have affect in your future attempts, at very least you will find yourself loosing confidence and going into a slump. At the worst, you can become so paralyzed by the fear of failure that you will no longer even try!

Furthermore, your mind will inevitably try to achieve whatever you visualize. So if you keep visualizing yourself making the same old mistake over and over, you are effectively training your subconscious to repeat it.

Instead, pay attention to your mistakes without dwelling on them. Try to determine what caused the error and how it can be corrected or avoided in the future, then visualize yourself acting correctly. In this way, rather than being a setback or hindrance, each mistake becomes an investment in your future success.