Well known GoJuKa. Student of both Miyagi and Miyazato Senseis and the person that IOGKF Founder,Morio Higaonna Sensei chose as his mentor An'Ichi Miyagi has passed away, according to Tetsuji Nakamura, IOGKF Vice Chief Instructor and Administrative Director.
Posted by S. Malanoski at 5:08 PM

The subject of KoRyu "old school" kata vs modern kata is nothing new any more. The reader may be surprised at exactly how long the argument for and or against the validity of both has been going on.

There was a time, not so long ago, when the martial arts were monopolized by the nationals of their endogenous lands. This is to say that many, if not most, believe that only Asians had the potential to fully comprehend an Asian art.

When the two concepts mentioned above are put together, it makes for an even more interesting debate.

Let’s start with the fact that the origin of what is called Naha Te "GoJu Ryu" was actually the Fukien Province of China. The kata that was learned there and brought to Okinawa was reformed in order to siut the Okinawan people.

As time went on, the Okinawan martial artists mastered and developed an art that became tyheir own, going as far as to change the kanji for karate from China Hand to empty hand so as for it to be more easily accepted when they introduced it to the Japanese mainland.

KaraTe became Japanized over the years with the names of certain kata in some styles being changed completely.

Just as in Asia, KaraTe became better understood and yes, even mastered in the west.

Let’s take a look at how the subject of modern kata has been discussed in the past.

Black Belt Magazine's January 1969 issue had a debate on this subject between quite a few well known karateka of the time. Three of these folks were from our lineage. Peter Urban, Richard Kim and Albert Gotay.

Here is what they had to say:

Inferior American products are no more insignificant than inferior Oriental products.
If it passes the test of time, it is good.
In general, it seems an oriental kata has been improved in America precisely the same way American and German optic and electronic developments have been improved in Japan.

It is the performance of the kata by the individual performer that determines the quality and not just the construction of the kata itself.

We speak English in America, but it is not the same English spoken in Great Britain. Yet for all intents and purposes, it is the same language and we can communicate. It is the same with kata.

Reformed kata may have some value, but the only significance if any, would be of callisthenic value. From that view point, any exercise is better than no exercise at all.

Feeling that some American sensei may be presumptuous in their attempts to evolve new kata, Kim reminds them "only a meijin can create a kata."

A meijin is one who has gone beyond the highest degree of proficiency in his art. He is one who has achieved KenSho. He is more than an expert or specialist.

There are no meijin in America, and the last karate meijin was Funakoshi Gichin.

Author's note: With all respect to Sensei Kim, that is a debatable statement, being that Funakoshi's Shotokan style has gone through so much change since his demise, that they truly must be producing quite a few meijin it seems...................
Also considering that Funakoshi was chosen to be the karate ambassador to Japan by his Okinawan seniors because of his scholastic back ground instead of his raw martial prowess, it seems that we are using the word meijin a bit loosely.

Going up to a metaphysical plane, Kim defines kata as "A unique method of religious practice with the aim of bringing the student to a direct intuitive realization of reality. It is meant for the body to be fazed into a total instrument of realization of the absolute mind. Kata is not a manifestation of logical reasoning as Americans have superficially mistaken it to be.

Kata brings the student by degrees, by complete transcendence, emancipation, total penetration, and identical alignment to Do or Dao.

Since the master cannot transmit his kensho, he uses kata to bring the student to the same state of illumination that he has attained.

"American instructors utilize systematic logic and creative imagination to produce kata, music, art or technology the same as the other masters. It has been said that the western man cannot achieve NIRVANA or SATORI and oriental ethnic back grounds are the best for the martial arts. What archaic nonsense!"

In a later issue of BB Mag. Urban wrote:

A matter of principal

I would like to sound my personal objection to the statement made in Black Belt's kata survey (January 1969) referring to my "apparent attempt to counter Kim's metaphysical phraseology."

Sensei Richard Kim took me by the hand in Yokohama during my teenage years and introduced me to the martial arts. He personally brought me to two famous meijin in Japan so I could specialize in the hard and soft styles of KaraTe.

I don't disagree with my sensei in principal, Only in degree. Also, I always knew my sensei was a meijin. In the martial arts, a meijin is a divinely inspired person. One who might be called a genius in a particular field. I believe that only a meijin can create a kata, and I also believe that meijin do exist in the United States. Sensei Kim's statement that there are no meijin in America is just another instance of the traditional modesty peculiar to meijin who have been trained in the orient.

Albert Gotay of Queens NY feels in some cases kata created by Americans does have significant value. Although American kata appears to have been created for convenience, I have seen others that are outstanding.

Kata is not created but merely evolves as the natural product of years of training and experience, coupled with dynamic personality and enlightenment.

In 1969 even martial arts scholars were not privy to a lot of the since discovered writings from the past.

Thanks to Kiyotaka Yamada, Sensei aka San Zinsoo who translated many old Okinawan martial arts writings, we can now see how the subject was viewed by Chojun Miyagi himself. 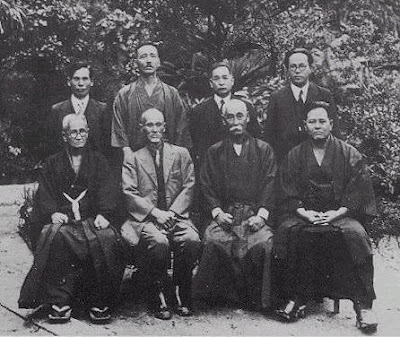 At the meeting of Okinawan KaraTe masters held on October 25, 1936 at the Showa Kaikan Hall in Naha City Okinawa, Miyagi had this to say:

Regarding kata, I think traditional kata should be preserved as old or classic kata. For the nationwide promotion of KaraTe, I think we better create new kata. We will create both offensive and defensive kata which are suitable for students of primary schools, high schools, universities and youth schools. Mainly, we, the members of Shinkokai = KaraTe promotion association, will make new kata and promote them throughout Japan. Now there are Physical Education Association and Okinawan branch of BuTokuKai. We also have senior students of KaraTe and those who are interested in KaraTe. We therefore cooperate with them to study and promote KaraTe. If such organizations and experts study KaraTe thoroughly, we can make a decision about the KaraTe name issue and KaraTe uniform relatively soon. I think the old kata should be preserved without any modification, while new kata should be invented; otherwise I am convinced that no one will be interested in KaraTe any longer in the future.

Well that pretty much settles that debate. = period!
Posted by S. Malanoski at 1:21 PM