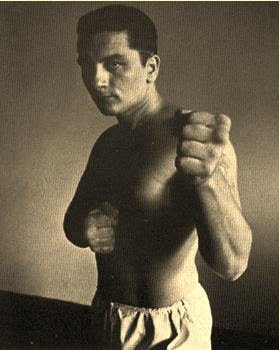 The other day, I was working on a kotekitai , arm pounding routine, with my student Travis Hartwell. When I saw him the next day, he was excited about all of the things that we had covered. He then showed me his forearms. Jokingly, I offered to review the arm pounding routine with him. His arms showed the expected bruises, and even though he looked as if he was ready to go for it again, albeit tentatively, I assured him that we would wait until the bruises healed. We are also in the process of building a proper out door makiwara now that the weather is getting better. The development of the body through exercise in breathing, and the conditioning of kotekitai, as well as makiwara are the foundation of our training which gives us the base on which to build upon.

As I was thinking about this later, it reminded me of an experience that I had while living in Okinawa Japan.

Having already been in the martial arts for so many years, I had a kind of radar when it came to finding dojos and Sensei’s on The Rock. A kind of makiwara homing device, if you will.
On numerous occasions, I followed the distinct sounds of the whack of the post, or the chains of a heavy bag, as they echoed in the calm Okinawan air, to find a pot of gold “DoJo” at the end of the proverbial rainbow.

So, KaraTe calibrated eyes and ears established, and with no further ado, it went something like this:

Picture it, Futenma City Okinawa, 1980. A few fellow Marines and I ventured up the hill from our barracks into the city, which although developed, was more like a busy town. We were actually looking for a record store, when an Okinawan guy, around my age and height, dressed in a track suit, and carrying a bag, confidently walked past us. He was not cocky, he was confident. It was that decorum of confidence that originally caught my attention. Then my makiwara homing device went off.

Upon closer observations, all done in a matter of a few seconds, I noticed that he had the unmistakable Golf Ball sized knuckles indicative of a serious KaraTeKa of what is now unfortunately referred to as Old School training. I hope that I won’t be construed as showing off, if I mention that I also caught the distinct sound of Tonfa clacking in his bag as he strode by. “Im serious…..”

So, after signaling my compatriots along, we followed him down the block, until he turned into an alley. Looking down the alley, I saw, that he saw, that we were behind him. He turned slightly and his expected suspicion was quickly changed as he watched me utilizing my miniscule kanji knowledge as I read what I could of the sign at the entrance of the alley, out loud to my friends. “ShoRin Ryu KaraTe Do DoJo.” BINGO! My BuDo Bloodhound powers strike again!

The guy with the knuckles waved us toward him and into the dojo, which belonged to Grand Master Seikichi Arakaki, 9th Dan ShoRin Ryu. No relation to my other teacher by the same last name. He introduced me to Arakaki who was extremely hospitable. After a brief conversation, consisting of introductions and a laugh after telling them the story of how we wound up there, Arakaki Sensei suggested that being that we were stationed walking distance from there, that we come train when we could.
Arakaki Sensei was a baker by profession, and would bring little Okinawan pastries in for students to eat during break, along with ice coffee. I remember thinking that this place was going to be fun, being that I was an ice coffee junkie and the thought of pastries at break made what was anything but a cake walk, seem like it was going to be a bit more kicked back. Yeah. I got kicked back alright…..


So come and train we did. Of course my 20 year old hot dog mentality felt it mandatory to demonstrate my Billy Badassness, by hitting the giant makiwara with Jodan Yoko Geri and Ushiro geri, so as to be taken seriously in my own mind. But in reality, the next thing I know, we pair up, with me paired with “of course” my new friend, Knuckles.

Oh! Did I mention that while we were warming up, Knuckles pulled out those Tonfa that I had heard clacking when he walked by, and commenced whacking himself on the shins?
Writer’s note: Told ya so…

Anyway, the plan was for one of us to go on the offense with punches and kicks and what not, while the other moves backward and blocks.

The standard Shorin Ryu jodan uke, chudan uke, and gedan barrai, where the blocks that everyone was using. Now keep in mind that I’m here, paired up with a guy with makiwara knuckles and a weird use for tonfa, and I now realize that blocking his forearms or shins was like blocking a baseball bat. It was no fun being blocked by him either! So, what to do?

After going back and forth the entire length of the dojo a few times with him, I realized that the only way to continue would be to use soft blocks.

Picture me being advanced on by my baseball batlike buddy, as I move backwards doing basically what looked like Tensho. Thankfully, when my partner saw how I was doing better with soft blocks, he started to do them also. Whew! Thank God.

So, what did I get out of all of this?
1. It is good to be in the position that no one wants to block, or be blocked by you.
2. When in doubt, soft blocks rule.
3. A strong foundation, built upon brick by brick, with properly tempered mortar, is what battle ready fortresses are made of.
Posted by S. Malanoski at 2:07 AM 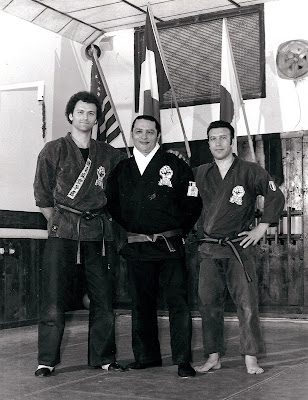 I cannot believe that once again, the new posting on That's My Satori is being done to announce the departure of another important figure in our GoJuLandia Americanus.

Most of you know all about him, so we will not go into the Ric Pascetta story here.

If you, for some reason, are not familiar with him, go to www.ricpascetta.com

What will be mentioned here, is that Shihan Pascetta was one of the people who Walked The Walk first, before he talked the talk, which he did also.

His accomplishments were real. His organizational skills, superb. His knowledge and ability were exactly the caliber of what SHOULD be expected of a Shihan / Hanshi / 10th Dan.

His fight record is historic.

His legacy, internationally, is impressive to say the very least.

I had the Golden Opportunity to work with an Italian Team from Italy that came from his stable when they attended one of my seminars. The teacher can be judged by his students. Well, in this case, I can tell you first hand, THIS MAN WAS AN EXCELLENT TEACHER. = period.

He made a difference.
Posted by S. Malanoski at 3:59 PM