Thanks to celebrated ShoToKan Champion Bill Beason, and our friend Shihan Frank Puello, we now have actual footage available of the great Louis Delgado performing KATA! For those who were not around during the old days, Louis Delgado was originally a student of Maestro Urban. He went with GMstr. Frank Ruiz, when Ruiz was told to "Go Teach!" and when NiSei GoJu was formed, he was Top Gun of Ruiz' competition contingency. Gaining more than just NY credebility, he won national acclaim by his historic win against a pretty well known guy named Carlos "CHUCK" Norris. (You can see him fighting Norris on youtube with Urban as referee.)

Delgado moved to California around 1970 or 71, continuing his training with Japanese ShoTokan Master Nishiyama, and supposedly Bruce Lee. I have never seen photographs or video of he and Lee, so I cannot confirm this, however I have no reason to doubt it. 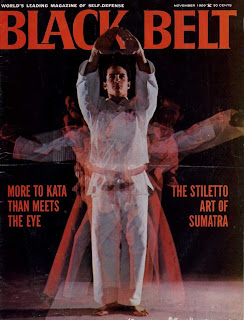 Delgado was one of the best fighters around, even though he was smaller and younger than most of his competition. Maestro Urban said that Delgado was afraid of No One, except for Mike Stone for some reason. I doubt that this was much more than respect for someone who had already attained the King Of The Hill position that Delgado was shooting for. With all of the photos and video available of this great KaraTeKa, it has not been until NOW thaty we have actual video of his kata. Yes, his kata was second to none! If you were not there, then you missed something fantastic. Until NOW!

In this video, Delgado slips and falls during his performance. However, he was THAT GOOD as to be able to jump right back up into the mode, and still look better than most could wish for on their best day.

Narrating this video is Master Bill Beason, who enjoyed an illustrious tournament career in his own right.

I will finish by stating, regretfully, that Master Louis Delgado passed away on May 17th 1991, of liver failure, caused by medication that he had to take because of lung tumors.

He was a nice guy, a fantastic KaraTeKa, and will be missed by all of us who knew him.