Some thoughts about kata. Part 1. 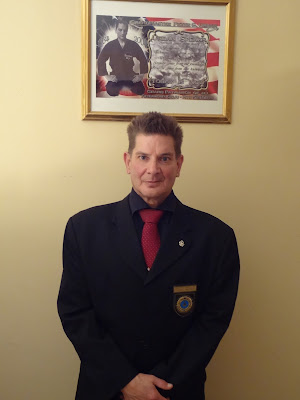 I have spoken to a few of my peers in the martial arts lately, on the subject of kata standardization.

The fact of the matter is, that during my tenure as Maestro Peter Urban's representative for the state of Florida, I was responsible for kata literacy among the Fight Schools Network affiliated GoJu Halls of what I named GoJuLandia South. With the help of Hanshi, Keith Teller, we were semi successful, which, all things considered, isn't too bad. But to be quite honest, it was a full time job, to maintain standardization within the circle of my own GoJu Halls, meaning my dojo locations as well as those of my direct students.

My focus these days, is on teaching my ShobuDo GoJu Jitsu curriculum, and Close Quarter Combatives, as I teach to the Sheriff's Tactical and Rescue Squad. 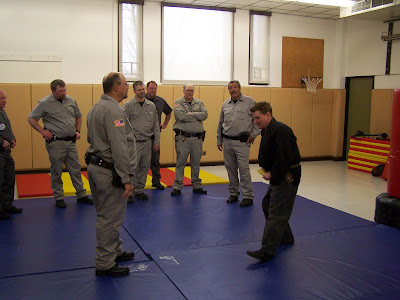 Let me begin by saying that as far as my house goes, there is standardization. I could care less anymore, about what others are doing. It is no longer my business, unless I am asked for my opinion.

Now adays there are so many factions of GoJu, teaching what they believe, and or claim to be "the correct way." When I say factions, I speak of all of the various Ryu Ha, and then the sub styles, break aways, do it your selfers, etc....

It seems kind of futile, to expect everyone to be on the same page anymore, however, the knowledge of the origin / origins, and the labeling of what it is that we do, is necessary in order to perpetuate accurate material. For example, I practice and teach KoRyu = old school kata, as well as what was later developed in Japan and America. The trick is to be able to decern which is which and how and why they differ.


Here is a re posting of a page from Urban Speaks "Maestro Urban's newsletter," that validates my knowledge of the katas of his system. Bragging rights don't you know.... 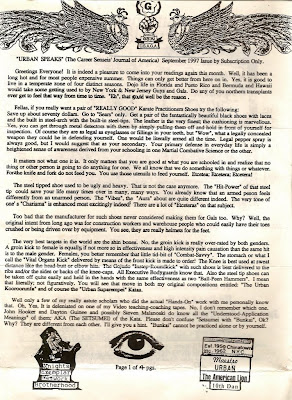 The rest, I picked up during my travels and training in Okinawa and throughout the Orient, as well as from my seniors, such as Dai Sensei Kow Loon "Kayo" Ong, from whome I have learned more about the KoRyu through casual conversations, than I could have by training exstensively in many of the so called Traditional dojos claiming to teach "The original stuff."


AS most of you know, the schematic of kata, is meaningless as opposed to the technical content = the meaning of the motion and the application in tandem exercise.

The stressing of Jiyu Kumite = free sparring, especially for competition, has most definately effected the essance of some schools of thought, which carries on to their approach of kata understanding. Not that kumite is not an important facet in our training, but the sparring mentality, vs the actual life and death combat mentality, brings to mind the age old addadge, "When all that you have is a hammer, everything looks like a nail."

It is also necessary to train the body, in order to be able to pull off some of the more sophisticated techniques of the katas. However, sometimes I must admit that I get a laugh out of some of the unrealistic techniques that some think they are actually training to perform.

In Freemasonry we have an expression,"Daubing with untempered mortar". This alludes to the  futility of delving into more advanced steps, before the work at the level you are on, has been squared away.

In the three years that I was stationed in Okinawa Japan during my Marine Corps days, I was exposed to quite a bit of this type of technique, such as kicking with the toes, striking with Ippon Ken, nukite, etc. This is not to say that these techniques were practiced speculatively, in theory, or waving in the air. They were strengthened during taiso and tempered on the makiwara, and on other striking devices such as tires, sand, rice and rocks.

Back in the 70s, I used to go to the Hare Krishna Temple in NYC with my friends, specifically to take part in their yoga classes, that were sometimes followed by transcendental dance, where the toes would be banged on the floor to the rhythm of the beat, which stimulates a chakra I suppose.

While training at Yonamine Sensei's Ueichi Ryu and KoBuDo dojo, exercises where usually punctuated with the same toe banging. I later found out that this was a prelude to makiwara toe kicking and even later tameshiwari in order to test the toes.... 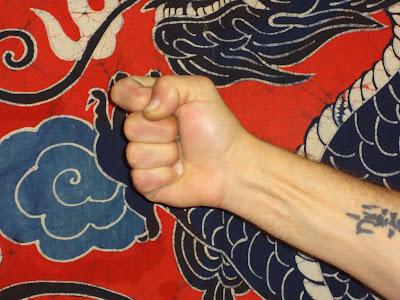 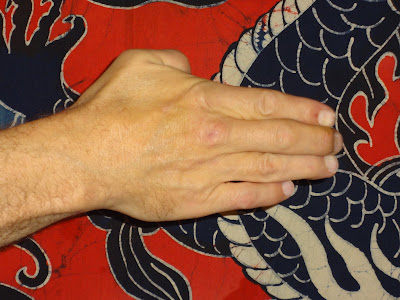 No, we didn't bang our fingers on the floor, and neither did the Hare Krishnas, to my knowledge.....  I kid.

Having already spent years developing SeiKen, UraKen, TetsuiKen, ShuTo and HaiTo by hitting the Urban board, and at Ron "The Master Breaker" Jeter's dojo, hitting anything that didn't move, until it did, I was at first given pause, when first I saw the sewing of the a for mentioned seeds in Okinawa, and especially when first seeing the harvest. 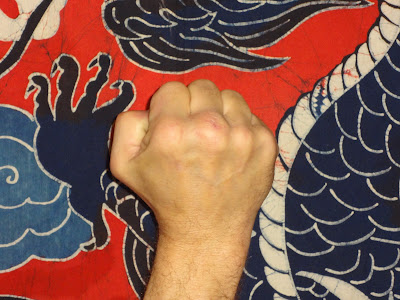 Maestro Urban called me Iron Hands for a reason, but I can tell you stories about Arakaki, Yonemine, Shinjo, and others that have me beat by a mile, and can really do all of the stick your fingers into someones rib cage, or rip your heart out stuff. "Incidentally, it takes doctors quite a long time in the OR to cut a heart free of the body using scalpels" so lets not get carried away with ourselves.

Picture it! Chinatown NYC early 2000 something. Some of my students and I where hanging out at Dai Sensei Kow Loon "Kayo" Ong's house, with Kayo and his family and students. We were waiting for a boxing match to start on cable, when our conversation went on to the subject of DaNaKow "Loosely translated, encounter, seize and rip," and the use of the NukiTe "Spear Hand". Knowing that my older martial brother has the KoRyu conditioned body, I sequestered him of his capabilities with the spear hand. With this, sitting on a small Chinese stool, "which I always suspected was actually a weapon," Kayo twisted at the hip and pierced through a large heavy duty corrugated cardboard box full of something, that was sitting on the floor behind him, with Ippon NukiTe "single finger spear hand," leaving a quarter sized hole in it. So Kayo could pull it off.

So, the moral of this story is:

Unless we have the skills to pay the bills, for real man, for real, then we must look past fantasy.

DaNaKow is the essence of SeiUnChin which means something to the effect of March far quietly, pull off balance and fight.

What is it exactly, that you are doing in the initial movements of SeiUnChin? And if you don't resemble the armor piercing people a for mentioned, perhaps this will shed light on a more realistic idea.

The death of a legend.

Haisai!
It is with great regret, that it must be announced that Joe Lewis has passed away.
He was ill for quite a while, so it was expected. Yet, it is always unnerving when someone that you looked up to as a youth, to the point of mimicking his technique and look, passes. He used to show up at quite a few events in NYC back in the 1960s and 1970s, and was more approachable to a kid like me at the time, than he was to a lot of the adult black belts. I actually used to talk with him, asking him questions, and joking with him, when he would say something off the wall and look at me, as if it was a private joke. 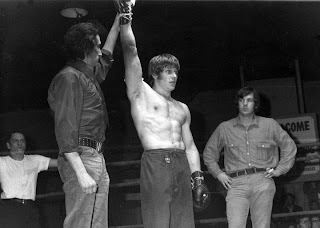 For those who don't know a damn thing about America's KaraTe history, "Because if you don't know about Joe Lewis, then you don't know a damn thing about America's KaraTe history," He was the undisputed Heavy Weight Champion Of The World in Full Contact KaraTe, and was one of the main Champions on the KaraTe tournament scene since the 60s. He began his Martial Arts studies in Okinawa, Japan, with Shigeru Nakamura, of Okinawa Kenpo, and of course, his main instructor, Eizo Shimabuku of ShoBayashi ShoRin Ryu,while he was stationed there as a US Marine, in between tours of Vietnam. He later trained with Bruce Lee. As mentioned earlier, Joe also had a Hollywood career, appearing in, and or starring in quite a few movies. 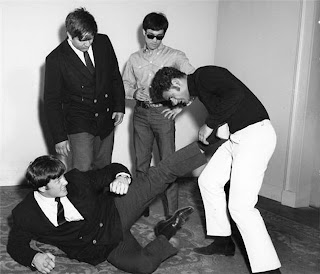 Incidentally, I later was part of the group of Marine KaraTeKa that brought Eizo Shimabuku to see Joe's Jaguar movie at the base theater of Camp Hanson in Okinawa, the night it opened. I kept in contact with him over the years, and happily, had a decent report with him in the last couple of years of his life. He even read this blog! Yes! I am proud to say that while I was living in California, Joe, emailed me after reading some of my stuff, discussed what I had written about the side kick, and invited me to a training session.

Joe Lewis will be missed, but will live on through his System, students, and all of us that he had influence on.
Posted by S. Malanoski at 2:03 AM