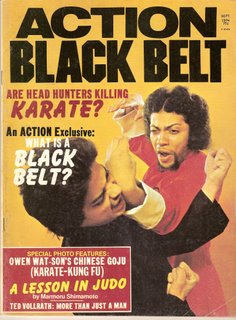 I truly hate to have to do this, but the word must go out that we lost another GoJu brother. I received a call today from Hanshi Wilfredo Roldan, Head of Nisei GoJu, that our old time friend Owen Watson passed away today, after a long battle with diabetes.

For those of you who have not been around long, Owen Watson was one of the original fighting greats of the early KaraTe Tournament scene in the US, not just in the NYC area, but throughout the country. He and his compatriot Grand Master Ron VanCleif hit the tournament scene like there was to be no tomorrow. Later they formed Chinese GoJu and delved into the chop socky Kung Fu movie scene of the 70s.

Owen Watson "Obosan, as he was called" later started his own system.

Having trained with GMstrs. Peter Urban, Frank Ruiz, as well as various kung fu teachers, Obosan Owen Watson was a true pioneer. His teaching manner was old school to the extreme! Many don't realize how many greats came from his flock. As a matter of fact, the current head of Nisei GoJu, Hanshi Roldan, got his start in KaraTe from Obosan!

Many thought him dead already, because of his vanishing from the scene, whereabouts known to only a few of us.

Chien! My old friend and KaraTe senior. Time to join the other greats, Urban, Ruiz, Wallace, Taganashi, Boddi, Yamaguchi, Oyama, Kim, and Miyagi.
Posted by S. Malanoski at 11:54 AM