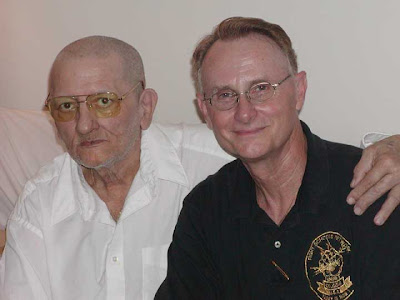 At first glance, Hanshi Price seems like exactly what he is, a well-educated professional. Originally a school teacher, he later became quite successful in, and is now retired from his career as a representative for a major pharmaceutical company. His mannerism is gentle and it is obvious that he is of high moral character.

This mild mannered persona masks a quite different back ground as far as the martial arts are concerned. He originally came from, and acheived Yon Dan Renshi in, the dojo of an old friend of mine, Master Joseph Kelljchian of Florida, who was a student of Sensei Urban. This group, now called U.S.A.G.F. is a no nonsense, hard contact, rough training group to say the least. 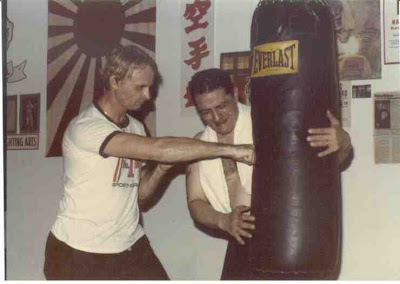 
Later going directly under the tutelage of Grand Master Urban, Hanshi Price always went above and beyond the call of duty.

I, as Sensei Urban’s representative for the southern states can tell you that whenever we needed anything, Price was there. He and his students also participated in countless seminars, classes, crazy training and tournaments that I ran in Florida. Speaking of tournaments, who could forget the wild tournaments that Price organized on Ft. Myers Beach for Master Kelljchian back in the day? Good times…….

A little vignette about the Internet:

I received a fax one morning from Sensei Urban, asking me if I could put together a web site for him. Originally Master Dayton Guinee had put together a website for Sensei Urban, however, at that particular time he was legitimately to busy to tend to such an affair. Keep in mind that when doing something for Sensei Urban, things had to be done immediately, so understandably Master Guinee had to vacate his position as web master. I contacted Sensei Urban via telephone, explaining that not only did I not own a computer at the time, I didn’t even know how to turn one on if I did. I informed him however, that I had an idea of who we could recruit as our internet guy. After discussing this with Hanshi Price, and him agreeing to take on the arduous job of web master, the official website of Maestro Peter Urban began. Originally called Martial Combatives DoJo. It is now called americangoju.com Grand Master Peter Urban’s Fight Schools Network. Sensei Urban’s intent was to have a web site that besides giving information about his system and organization, would be a list of his active, loyal membership. In order to be listed on his site, one had to apply directly through Sensei Urban. There was no guessing or being mislead as to an applicants standing with Sensei Urban, for as I said, the only people listed on the site were those who’s name received the green light from Urban. 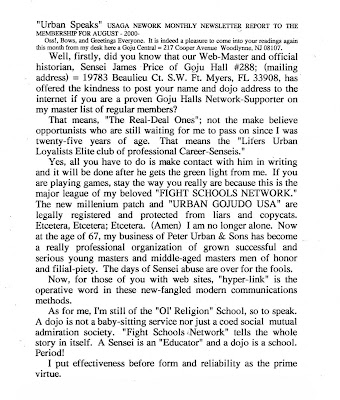 There have been misconceptions lately as to www.americangoju.com being only for the last wave of students of Sensei Urban, but as read in his news letter above, it was for all of his legitimate loyal dues paying instructor level students.

Many of us later made our own web sites since then, however, the site that Hanshi Price put together was and still is the one and only official website of Maestro Peter G. Urban PHD. 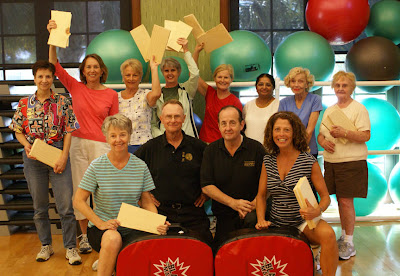 Today = Now, Hanshi Price is still active in the martial arts, aside from being Webmaster.

Now at ninth dan, he teaches KaraTe and practical self-defense classes at the clubhouse of the Pelican Preserve where he lives with his lovely wife Karen. The Pelican Preserve is an exclusive gated community built in coordination with a National Audubon Society preserve. He is also the curator of the beautiful butterfly gardens there at the preserve.
Posted by S. Malanoski at 8:11 PM 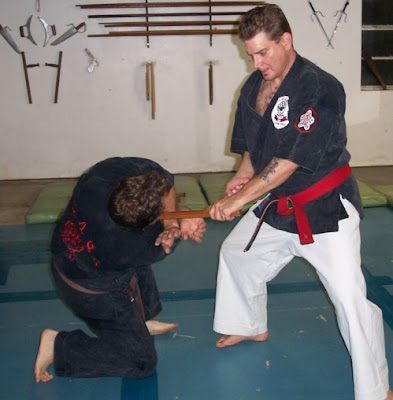 Something that I have not written about in ages is the nunchaku. Personally this was always my favorite toy/tool/weapon, since I was a kid.

Grand Master Urban often spoke of the difference between a TOY, a TOOL, and a WEAPON.

What is the difference?

Many believe that the nunchaku was originally a farm tool,. A flail used to thrash crush or gather rice etc., later to be used after the ban on all weapons in Okinawa.

Others believe that it was a piece disconnected from a horse bridal .

Although there is little doubt that these tools were at times used as weapons, it seems unlikely that their presence in the Chinese arts came from Okinawan farm tools. Therefore it seems reasonable to believe that the flail has been around in various forms all over the globe since someone was creative enough to attach two or more sticks or what have you, together for the purpose of playing, working, or fighting.

The nunchaku has been an object of controversy on an off throughout the years.

As a kids, in NY and NJ back in the 70s, we used to carry them concealed on the streets. This was both before and after they were made illegal. My memories of the bloody nunchaku fights between various factions of neighborhood gangs are still quite vivid. As a matter of fact, the one and only time that I was ever knocked unconscious in my life was self induced while practicing a difficult under the arm pit and over the shoulder reverse switch at high speed while walking my vicious standard poodle Noal. I awoke with Noal licking my face as a cop looked down at me while straddling over head. The cop said “You were doing pretty good until you clocked yourself!” He had been watching me from a distance. I was more worried about being arrested, than I was about having just whacked myself unconscious. Thankfully, when I showed him my dojo id, he went to his car and brought out his own police issued black, square nylon nunchaku and handed them to me, asking if I wanted to give them a try. I remember that they had a very short string and I was able to whip them around even quicker than my own. However, the police nunchaku was actually more for seizing, pinching, and come along techniques.

On a more legit note: I actually carried the nunchaku that I bought in the 70's at NYC's Honda Martial Arts Supplies, into combat while in the Marine Corps. I also trained fellow Marines in the use of the nunchaku while stationed in Okinawa Japan, both at my on base dojo, and during the hand to hand combat classes that I gave on various bases throughout the 3rd Marine Division.

The nunchaku was made illegal in the 70's, in California first. Then after a police officer had the misfortune of chasing a thug up to a tenement building’s roof, to which the thug waited next to the roof’s door for the cop to follow, the thug proceeded to use a rear strangle technique on him as he exited the stairwell onto the roof. The cop was murdered, and the nunchaku became illegal overnight in NYC.

In this article from Official KaraTe Magazine January 1974, our own Shihan Al Gotay warns the reader of the new anti nunchaku law. (Click on article to enlarge.)

I visited Brendon Lai's Kung Fu Supply Store in San Francisco the other day. Rather than a display of various nunchaku, they had a sign on the counter, saying that nunchaku were illegal out side of martial arts schools in the state of California, and were not sold there.


The nunchaku was introduced for use, to the NY and NJ police departments by USA GoJu instructors who were on the job. This did not go without a certain amount of controversy either. 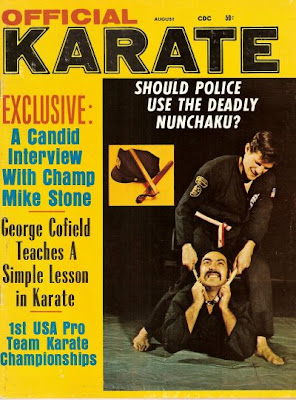 In This August 1970 issue of KaraTe Illustrated Magazine, the subject of police use of the nunchaku is discussed by Shotokan Master Fred Hamilton "RIP," and NinJitsu Master Ron Duncan, as well as Shihan Al Gotay, who also demonstrates Police Nunchaku techniques. 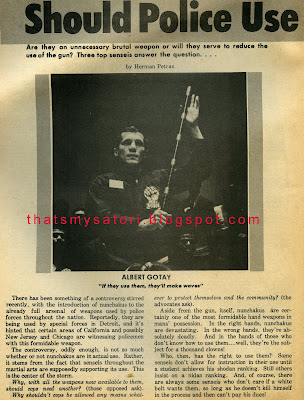 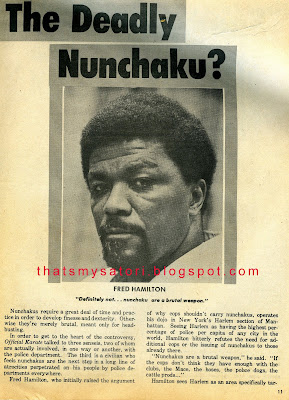 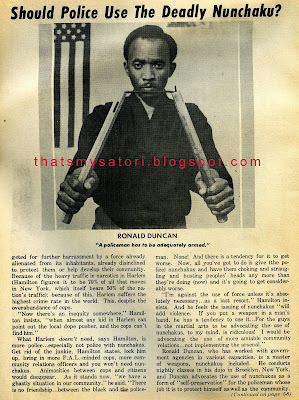 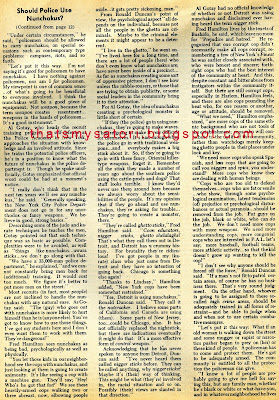 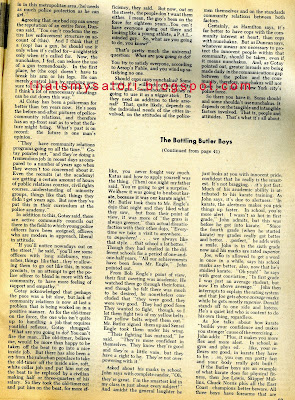 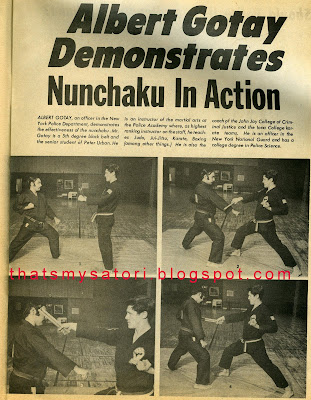 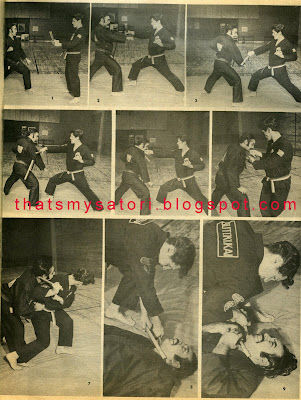 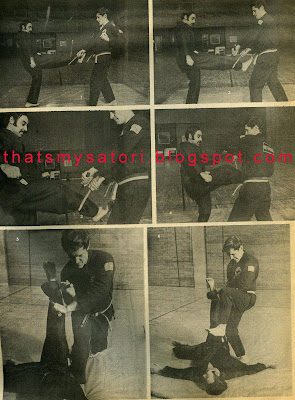 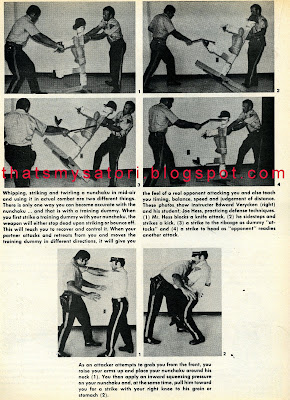 Master Ed Veryken and Master Joe Hess, both were instrumental in training Police in the use of nunchaku, as seen here in Official KaraTe Magazine's Annual Special Weapons Edition 1974. 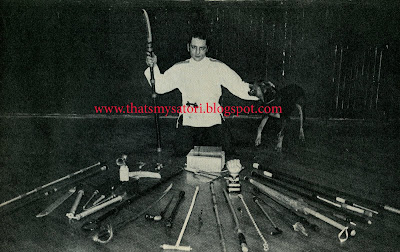 My nunchaku training came from quite a few sources. I learned formally from Sensei Urban “who was a weapons genius,” of course. 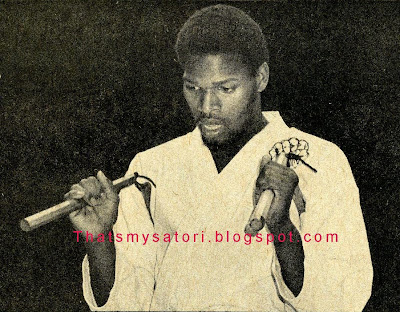 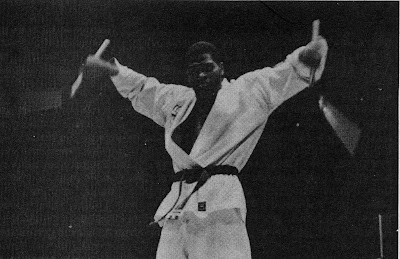 I also learned from Sensei Ernest Hyman in the mid 70s, who many may remember was billed as the fastest man in the world with the nunchaku at Aaron Banks’ Oriental World Of Self Defense at Madison Square Garden.
I wish that I had some video of Sensei Hyman performing. You would not believe it! I can still remember walking around with cracked finger nails and sore hands after the nunchaku classes that he gave at the New York Karate Academy. 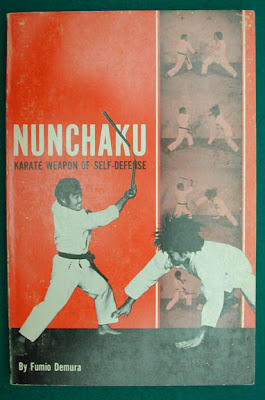 Everybody had a copy of this book when I was a young teen. Fumio Demura's Nunchaku KaraTe Weapon Of Self Defense served as our Chucker's Bible.

Later while stationed in Okinawa I learned the original premise from Dai Sensei Hanso Arakaki.

The way that nunchaku is used in the Ko Ryu = old school is a bit different from what you see in the modern versions. The flailing is less complex, however very powerful. The techniques are really not so much different, but separates them from the modern, is that they were used as a defense against weapons. But for that matter, the bulk of what is contained in the old KaraTe kata are techniques that deal with fighting against an armed opponent.


Hanshi Tadashi Yamashita is an Okinawan Shorin Ryu master who has lived in California for many years. He became quite famous back in the day for his flashy nunchaku demos.

No article about the nunchaku would be complete without clips of Bruce Lee.


Return Of The Dragon