An interesting perspective on Khenfoia Padu.

I received an e mail from from my senior and friend Dai Sensei Kow Loon "Kayo" Ong, in response to my piece about GMstr. Padu. As a youth in Sensei Urban's Chinatown DoJo, Kayo had much more interaction with GMstr. Padu than I ever did, and was gracious enough to give me the OK to post his message to me here.

I am very sorry to have learned of GM. Khemfoia Padu's passing.

Yes, Khemfoia Padu was a very unique man! He was giant of a man on the Dojo floor as being a big man physically. Hey, I was 110 pounds or less back then.... hahahaha. Believe it or not, when I was a youngster at Chinatown Dojo, I had always watched his fighting ways and skills with scrutiny. His ways and characteristic of fight had always intrigued me and then prompted me to seek ways as to answer an opponent with his capabilities. He was different and his differences worked for him very well!!! His "differences" had inspired me as well.... Anyway, another great elder lost.... 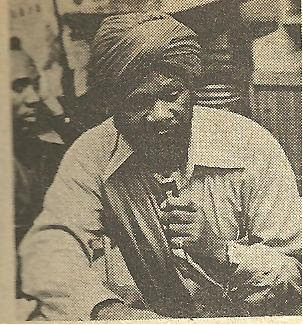 Unfortunately, we lost another GoJu brother. This one, from the original Urban guard. He was born on January 21, 1935 and died on November 28, 2011. I personally did not know him very well, but for the memory of a large senior yudansha in our organization who always wore a turban. What we had in common was that we came from the same teacher, practiced the same style, yet we came from otherwise very different worlds. He was imposing in appearance, yet kind in demeanor. He was a professional in the holistic genre and a highly spiritual gentleman of quality.

The following is a piece from Official KaraTe magazines February 1972 issue. 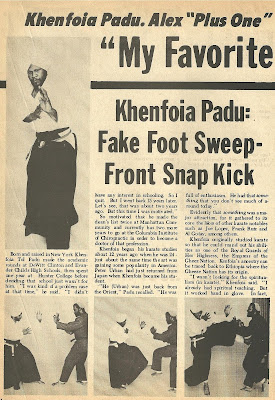 Last night at the Most Worshipful Prince Hall Grand Lodge, which is a Masonic Temple in NYC, GMstr. Padu was remembered. He is now in the company of the Great Architect Of The Universe. Rest in peace my GoJu and Masonic brother. Osu!
Posted by S. Malanoski at 4:29 PM