I finally found footage of the infamous Master Breaker!

As I mentioned in an earlier post, Grand Master Ron Jeter was a major mentor to me, as my coach during my time in the 70's as a member of his competition team.

He truly was somthing to behold, both on stage and in person. 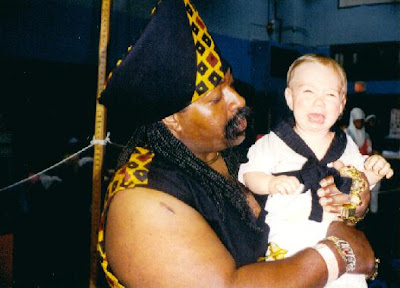 This is a pic of he and I during our first training session.

He was a real nice guy, but I can see why this kid would be a little nervous.

Here he is TEARING THE HOUSE DOWN as we called his demo back in the day.

I could not help but feel a little sad when I watched these clips.
Besides being my coach, he was my friend, and I truly miss him.
Posted by S. Malanoski at 8:31 PM Osu!
Back in the 60s, The Sensei = Urban was frequently seen in Black Belt Magazine. At that time, he was one of, if not the, most sought after tournament official. Here he referees an intercollegiate match between students from The John Jay College of Criminal Justice and Iona College. The event took place in 1968 at John Jay in NYC. 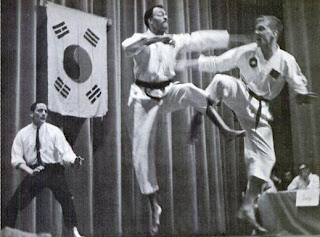 Here is The Sensei in 1968 refereeing a match between the late Thomas LaPuppet and the popular Texas Tae Kwon Do stylist Skipper Mullins, at S. Henry Cho's All American Open. This was one of many historic matches of this event, as both competitors were super stars of their respective arts and states. LaPuppet being a New York Shotokan stylist and Mullins being a Texas Tae Kwon Do stylist. For those of you who were not around back then, Mullins had the fastest feet around at the time. 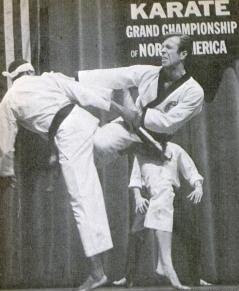 Here is something that you don't see every day.
Urban student Leon Wallace " who later founded Harlem GoJu," fighting Chuck Norris, as Urban referees, at the same All American Open event. 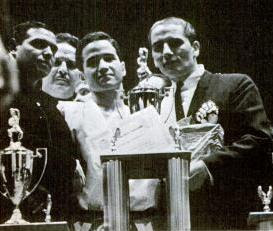 Nisei GoJu founder, Frank Ruiz poses with his student Louis Delgado and his teacher Peter Urban after the 1968 All American Open.
Posted by S. Malanoski at 7:36 PM