In memory of GGMstr. Aaron Banks. 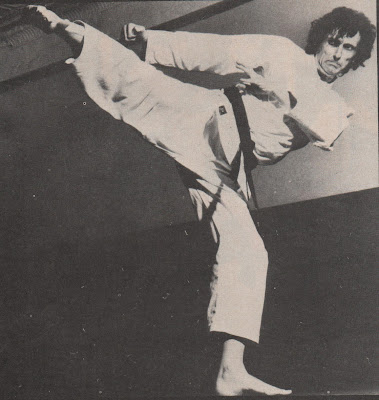 Sad news indeed today. One of the biggest names in early promotion and production of the martial arts has left us. When we got home today, my fiance Audra checked her facebook account and informed me that she had just read that GGMstr. Aaron Banks had passed away at the age of 85.

Beginning his KaraTe career in 1960, under Sensei John Slocum “ShoToKan” and later with Chris Debaise, Thomas Boddi, John Kuhl, Chuck Merriman, and Peter Urban. He had affiliation with Gogen Yamaguchi, and then Gonnohyoe Yamamoto over the years. 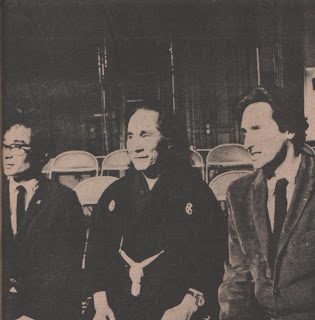 Aaron Banks, as an instructor, produced quite a few well known champions, and many not so well known, but quite talented offspring. Names such as Ernest Hyman, Rex Lee, Eddie Moralez, Janet Forray "Banks", James Santiago and Wilbert X Majette, “teacher of Ron “Master Breaker” Jeter, just to name a few.

As a promoter, he took the KaraTeBall and ran with it. It seemed as if, anything that could be done with the martial arts, he did, or found a way to get someone else to do it at one of his way too numerous to list endeavors. 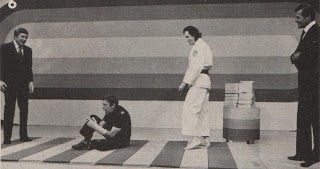 Television shows like Mike Douglas “if you remember that one, you are old…,” and most notably The Wide World of Sports! Starting out at The Waldorf Astoria, and Manhattan Center with his major events, he literally went from renting out Sunnyside Gardens, to Madison Square Garden, in a sold out success story, nationally, and I’m sure internationally televised.

The Oriental World of Self Defense was literally hours of nonstop in your face martial arts demonstrations by literally everybody who was anybody in one way or another. From Yoshiteru Otani performing IaiDo, to Tiger Kim flying through the air and breaking things. From Ernest Hyman breaking extreme amounts of Ice, to Richard Bowe blindfolded and hoodwinked, defending against a real knife. From the Joe Hess vs. Beth Bussey male female contact match to Ralph Bialla catching bullets in his teeth, and I’m leaving almost everything out, The Oriental World Of Self Defense was an extravaganza to say the least.

Old timers may remember the snafu, which was the Sun City incident. GGMstr. Aaron Banks actually took his show on the road. The Apartheid authorities, in South Africa at the time, asked that GGMstr. Banks not bring the black martial artists in his show. 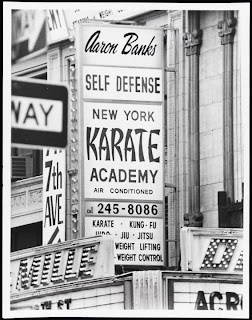 Back in the 70's, when my friends and I would go on our Urban Shugyo = when we were not at the dojo, we usually were visiting other dojo to train, or just hang out and watch. I attended some of the nunchaku classes given by one of the top guys there = Ernest Hyman. But most of the time, you just paid your dollar to Arther Taub, the receptionist / guy Friday, and you could go inside and watch one of the many different types of classes that went on there at any given time. Oh! I forgot to mention, the one and only time that I met Bruce Lee was when I was a little kid, visiting Aaron Banks' dojo with my father. I honestly don't remember if it was the same location as pictured, as I was about 8 years old I'm pretty sure. Lee was making an appearance at the Madison Square Garden event the next day. It is no exaggeration to say that you never knew who you were going to run into if you stopped in enough. 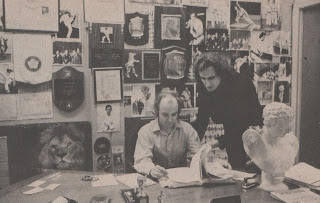 There was a Shiai = literally people gathering = inter school competition, at his DoJo every weekend and later in the 80s, he ran a tournament at Gleason’s Gym in Brooklyn “under the Brooklyn Bridge,” every weekend. 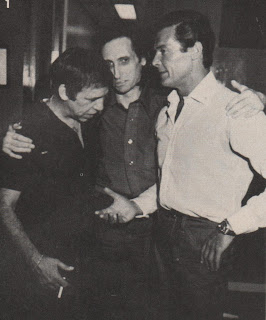 Originally, an aspiring actor, GGMstr. Banks always had a connection to Broadway and Hollywood, teaching and interacting with accomplished and famous personalities, as seen here with drummer Buddy Rich and actor Roger Moore of James Bond fame. Banks himself was in quite a few movies. Being a showman, he took this opportunity to bring a certain campy drama to the screen, not so very unlike the Golden Harvest genre.

GGMstr. Aaron Banks was way ahead of his time when it came to Organizing. At a time when the PKA was the major body for full contact KaraTe, he formed his own WPKO, with it's own Champions of various weight class. This was not a mom and pop shop operation, and I can remember like it was yesterday, seeing and meeting folks like Chuck Norris, Darnell Garcia, Benny Urquidez, at his events.

No matter what your opinion of GGMstr. Aaron Banks and his operation is, no one can ever say for a minute that he did not contribute to, leave an impression on, and pave the way for the next generations of Professional Martial Arts.