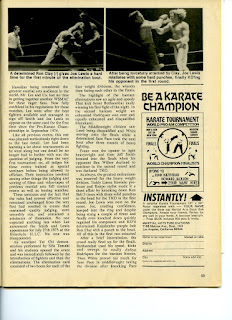 The other day, I was looking around on YouTube, and just when I was thinking that I'd already seen it all, up pops a video of an historic occurrence. I felt obligated to write an article about this newly found precious piece of history.

I have written and rewritten this article numerous times. Why you may ask? Well, the fact of the matter, is that one of the people in the article is no longer with us, and although he could come off quite arrogant at times, he was one of the most accomplished fighters in the history of American KaraTe. So I find myself trying not to be too disrespectful of the dead.

Also, because I have a personal history with both people that I am writing about, I found myself writing too much about me, instead of them. So I have omitted most of the self gratifying material. I hope that the reader will bare with me, as I do have a dog in this fight. In this case, a "Devil Dog." That moniker was given to the United States Marines during WW2. Actually all three of us are former Marines.

Having been in the martial arts since the 60s, like so many of my generation, I came up in the ranks looking up to, and following the career of California's Golden Boy, the late Joe Lewis. Pretty much, the undisputed king of the ring, Lewis had a very animated personality. Much like a Championship Wrestler, he had a knack for making comments that would really upset people. But it was all part of his persona, and as a youngster, I emulated his style of fighting, his look, and yes, often his off color commentary. I often would see him at tournaments in New York back in the day, and because my teacher was often one of the people running the show, I had the opportunity to be able to hang out and talk with him on quite a few occasions. He was funny! Some of the things he would say, made me look around to see if anyone else was hearing this stuff, and when there was, I was glad that it was him that said it, and not I... Don't get me wrong, I was only a kid, and if it wasn't for my teacher, I probably would not have had that opportunity.

As a matter of fact, many years later in the 90s, a young black belt that used to train with me occasionally, went to one of his seminars, and although he brought me back an autographed picture of him, Joe Lewis didn't remember me. I was later in communication with him and he invited me to a workshop, but unfortunately he passed away that year.

With a reputation like Lewis had, it was always big news whenever he won, but especially when somebody got the better of him. That didn't happen very often, but when it did, you could bet that it would be in the magazines, and all over the KaraTe grapevine...

I remember reading in 1975, about a no holds barred full contact event that had been held in Hawaaii in which the unthinkable happened. Joe Lewis drew a KaJuKenBo purple belt as an opponent, and got the surprise of his career. As the story went, the purple belt really pummeled Lewis for the first part of the first round. I remember thinking that this couldn't be possible. Pummeled by a purple belt??? But I also read that the purple belt was a US Marine, which made it understandable as far as how tough the purple belt must have been...

Four years later, I joined the Marine Corps. After a year of training, I was stationed in Okinawa Japan for the next three years. This gave me many opportunities to advance my martial arts knowledge and experience, both in my parent style of GoJu / Naha Te, and in many other styles as well.

Whenever I was at Camp Hanson for school or rifle range, I made it a point to visit GMstr Eizo Shimabuku's DoJo, which was right across from Camp Hanson, in Kin Village. I got to know Shimabuku, and made friends with his students, so I was able to learn even more about Joe Lewis' exploits. You see, Lewis came from that dojo. As a matter of fact, I was part of the group of Marines that took Sensei Shimabuku and his wife on base to see the newly released Joe Lewis Jaguar movie!

Okinawa of course, is the Holy Land of KaraTe. But there are two different martial arts scenes there. If you are in the military, you have access to the On Base scene. Beyond the numerous martial arts classes taught on base, there was a never ending influx of some really talented martial artists from all over the States. They came from every style imaginable, and some where as good, or better than the mainstream personalities that one grew up watching or reading about, even though one may have never heard of them.

The Okinawa KaraTe Referees Association was formed in order to run tournaments on the various bases. When I was not training at a dojo somewhere off base, I took the opportunity to utilize the on base facilities. The Field house Gymnasium was a large building with a basketball court, and an actual dojo replete with mats, hardwood floor, heavy bags, etc... Needless to say, this attracted martial arts types like flys on the stuff that flys like...

Picture it: One day I was at the field house dojo working out, when a large individual that I had never seen before walked in. He was wearing a gi with a black belt, as was I and most of the folks that had been there that day, but he was different. He had a few years on me, so I knew that he had to be pretty high ranking Marine Corps wise. I was a corporal at the time, and he turned out to be the newly arrived First Sgt. or Master Sgt. attached to one of the Battalions on Camp Foster. Then the inevitable happened. He asked me if I wanted to move around a little. It was very much like moving around with a Volkswagen...

He was very fast for his size, and his version of moving around was a bit harder in contact than I expected. After he landed some pretty hard shots on me, I got off the floor and kicked him in the face with a round house kick. He laughed... As a matter of fact, this guy laughed the whole time we sparred, and after getting to know him, I found that he always laughed when he fought someone. This is very nerve wracking for the opponent, "It pissed me off...," and worked for him very well.

The next time I saw him, he was with a friend of mine from the Okinawa Referees Association, who mentioned that my new friend had fought Joe Lewis in a full contact match in 1975, as a purple belt! That is how I met Ron Clay.

As I mentioned before, it is of historic record that although Lewis knocked Clay out later in the round, he obviously was not expecting or prepared for the initial onslaught of what turned out to be the shot heard around the world as far as what was written and spoken about on the martial arts scene.

Fast forward to the other day: I am watching this video of the match between Joe Lewis and Ron Clay, which is narrated with Lewis being asked questions about the fight. What Lewis says pretty much lives up to the persona that I described before. However, regardless of the lack of credit given during the narration, here you can see the action for yourself.

I have not seen Ron Clay in over 30 years, but thanks to the wonders of modern technology, he is my friend on Facebook and a member of the Satori Martial Arts Study Group. I look forward to his chiming in here, with his side of the story...